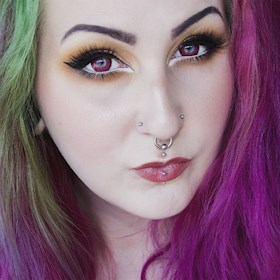 Swedish makeup enthusiast & a great love for photography. Join me in my journey to make this world a bit more colorful. I'm pretty sure I'm very behind on this. but you know what?
I don't care!

For you who don't know:
Isadora is a Swedish makeup brand that are fragrance free, cruelty free, clinically tested and kind of affordable. I mean, there is cheaper brands, and there are more expensive brands. In Sweden Isadora is classified as a "drug store" brand that you can find in most bigger stores.
I bought this one at H&M For example!

If you follow my Instagram you might have seen when I shared this the first time, and that I said that I grabbed it because of the highlighter, because it was so similar to Too Faced Champagne truffle that I love to use as a highlighter. I even shared a comparison between the colors and even threw in Sugarpills Wink in the mix.
And even though Champagne truffle is a little more pink, this is not far off, and I really like how it looks on my face.
and I've used it several times on my blog (here & here), and on my Instagram. Even though I bought this for the highlighter I do really like the blushes The two matte ones are the colors I am drawn too when I do my makeup. and sometimes I do spice it up by putting the pearl ones on top of the mate blushes. That way you get the more natural glow from within, than just *BAM* SPARKLES! if you know what I mean?

the compact is quite big, for me at least, since it's way bigger than the palm of my hand, but then again; I have baby hands. but considering you get 4 blushes and 1 highlighter I'm not complaining. and it's a nice travel compact. I do however wish that they would've put in a contouring powder. but since this palette is all about draping, and not contouring I do understand why they haven't.

Draping, what is that?
Well. it's kinda contouring, but at the same time not. the meaning here is that you will take the darkest blush and "drape" it underneath your cheekbones from the apples up to your sears ans swoop it up to the temples, if I've understood it right, And then you take the lighter blush and drape in onto your cheeks in the same manner. and then you apply your highlighter.
And judging from the picture on the back of the compact (and to the right of this text) it will give that classic 80's look. which can look cool to some looks. I might have to try this one day tbh.. As you can see, the colors are beautiful, and they're really smooth, and pigmented! a little goes a long way with these in my opinion. that's why I like to apply blush with a small kabuki brush, because it blends it out beautifully as you apply it.

I know they've come out with a few new colors on the wheels, But I have only seen pictures of them so far, so I don't know if I will be getting those too. But so far I'm really happy with this.

Now, for pricing? like I said, I bought mine at H&M and I honestly just grabbed it and went to the register and don't even remember what I paid (since I also had some other things) but from a little googling irt seems that the price of these is around 229 sek depending on where you buy it.

And I also noticed that you can buy these from Walgreens if you live in America. But from what I can understand you can only order them online for now. And they cost $25 there. H&M have come out with this gorgeous product. Which they've probably had for a while now, but I rarely visit H&M so I'll blame it on that.

The product I'm talking about is their Glitterati Mascara Liner that is like a glitter eyeliner and a glitter mascara in one. Cool huh?!

H&M describes them as a colorful, glittering gel liner and mascara in one. With a formula that is full of glitter that gives a glistening touch to your look.

I've got three out of five colors to show you today.

The other two that I don't have is your standard Gold and Silver. First off we have Nebula, who is a pretty iridescent pink glitter with a green shift to it. it's beautiful, but really hard to capture on photos if you're like me and don't have good lighting. Next up we have Starlight. Which reminds me a lot of Viva la Divas Crystal glitter eyeliner in Disco. both have that white/see through base with holographic glitter in them. but I do think this one is cheaper, and that you get more product. Lastly we have the one who captured my heart, and made my whole body scream " I WANT, NO NEED IT NOW!" when I saw it on the shelf.
Liftoff is this GORGEOUS copper glitter with a green shift to it that really doesn't like to show up in pictures. This is one of those things you really have to see in real life to understand how pretty it actually is! If I hadn't seen this orange gorgeousness on the shelf one day when I was in H&M I would've never even looked twice at these. But now I did, and I don't regret it at all! This is the wand. Nothing fancy really, but it looks cool. So it has the eyeliner tip on the end, and then the "mascara" bit that's just ridges in the plastic so you can easily disperse the glitter onto your lashes.

Now, this is not meant to be instead of your mascara, this is more of a glitter topper. so you put this on you own/false lashes when you're done with your makeup, and it will add some extra sparkles to it.
I used nebula for that on Christmas eve and it was beautiful! unfortunately I don't have any pictures of it, But I most probably will redo that makeup I wore.

Now these pack a lot of glitter for a simple line, if that makes sense? Like you get a lot of glitter in one stroke, and doesn't really go in for a second one of top of that. This is something I like. And you can barely feel the glitter when you have it on your eyes and lashes.

But are they as annoying as glitter can be?
What do you think? It's GLITTER! Of course you're going to find it everywhere and anywhere when you've used these and then taken it off. Surely it won't be ALL over the place, but it will be all over your face and hairline when you've taken it off. But that basically is the price to pay when you want to me a sparkly Goddess! And of course some swatches! the order is from left to right: Nebula, Starlight & Liftoff. In focus and slightly off.

I do recommend these if you're into glitter, but don't to be over the top with it. Or if you just want pretty sparkly things overall. But honestly, if you can go to a H&M Store, check if they have these and swatch them yourself, because these pictures do not do these beauties any justice. because they are simply gorgeous and I'm really happy I have these in my collection. oh gosh, I'm really bad at his..
oh well, a couple of months back I ordered some thing from sugarpill on their sale. they had this crazy sale where you could get these electrocutes stupidly cheap. unfortunately I don't remember what I gave for them, but I do know their original price is $13 a piece and $65 for the whole bundle. I think the sale price for the bundle was like $20-something.
And of course I had to buy a refill of my FAVORITE white eyeshadow ; Tako.