When I lived in Seoul in 2016-2017 I grew really fond of Ice lattes! Madde and I would always order one before class and considering we were there mostly in the winter and still opted for the iced version I can assure you thery were bomb! The really nice thing with Ice lattes or coffees in Seoul was that they REALLY had a good coffee taste! The balance of milk, coffe and syrups were so on point on most coffee shops. You had the pricier ones like The Coffee Bean and Tea leaf and the cheaper ones like the little one right under our apartment that I can't even remember the name of, haha.

That probably one of the only bad things of living in Seoul for so long I grew a liking to coffee and the ones in Sweden couldn't compare anymore! Up until now I haven't been ablee to find an easily accesible coffee that doesn't just taste like water or milk in cafes... Even the expensive chains felt like I was paying for over priced milk....

I decided to learn how to make my own iced lattes but the only set back was that I didn't have or was motivated enough to get my own barista macine to make the espresso shots. With a bit of googeling and some youtube videos later I got familiar with the art of making COLD BREW! Quite simplified you get some grounded, the kind you use for a french press and than you let it sit in cold water for 12, 24 I usually go for a bit over the 48 hour mark and then drain it into another container so your left with a strong coffee concentrate without the bitterness of when you make it with hot water.

All you need afterwards is some syrup if you like a specific taste to your coffee or you can have it unsweetened or with some simple syrup, a milk of choice and of course ICE! You can also have it black or as an iced americano, I've seen most people dilute it with some water then but I'm not a black coffee conisure, I think I'd probably just drink it as it is with some sweetner and ice but don't take my word for it you might get extreme coffee jitters after! 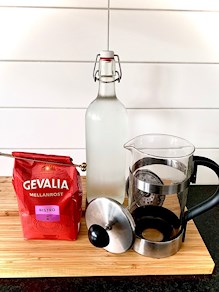 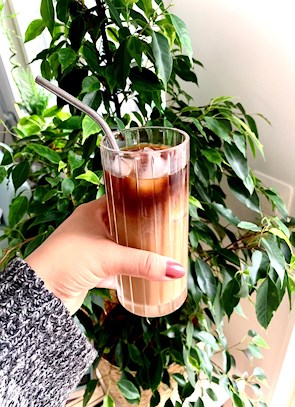