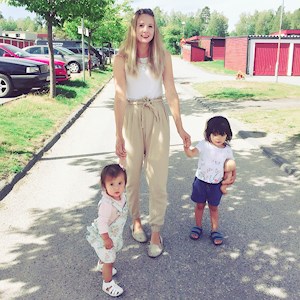 Across the board, all the moms mention one golden rule: Don't shout or yell at small children.

Traditional Inuit parenting is incredibly nurturing and tender. If you took all the parenting styles around the world and ranked them by their gentleness, the Inuit approach would likely rank near the top. (They even have a special kiss for babies, where you put your nose against the cheek and sniff the skin.)

The culture views scolding — or even speaking to children in an angry voice — as inappropriate, says Lisa Ipeelie, a radio producer and mom who grew up with 12 siblings. "When they're little, it doesn't help to raise your voice," she says. "It will just make your own heart rate go up."

Even if the child hits you or bites you, there's no raising your voice?

"No," Ipeelie says with a giggle that seems to emphasize how silly my question is. "With little kids, you often think they're pushing your buttons, but that's not what's going on. They're upset about something, and you have to figure out what it is."