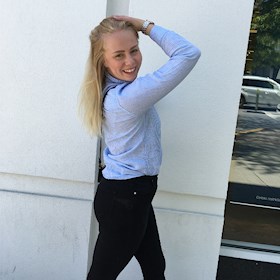 Sofiehedlund
Sofie
20 year old girl living her dream working as an au pair in New York. A blog about life, friends, family and travel. Hope you enjoy it! I know, it is a couple of weeks since Christmas, but these pictures were to cute not to post. I’m going to let the pictures speak mostly for themselves. But I have to say it was an amazingly cozy Christmas week, with my host family. Joy, food, and snuggles! Like I established in my last entry I don’t belief in resolutions and instead I was talking about setting goals for yourself. I always set goals for myself and in everything I do. I set goals when it come to training, studying, work etc.  ​Because by setting up goals, I know that I will always continue challenging myself into learning and developing to become the best version of myself.

So what are my goals for this year?

My goals this year is a bit different than previous years. This year, I am focusing on myself; mentally, physically, and my relationship with friends and family. * Be a better friend. I want to make sure to really be there for the people I care for. Look over my friendships, and try to invest more. This includes becoming better at “checking in” with them, and become better at, for example, calling.

* Look over the energy in my life. Where do I focus my energy, and where do I want to focus my energy? If those two aren’t the same I’ll have to work on changing that this year

* Work on self love. I have come so far when it comes to this goal. I enjoy spending time with myself, but this year I want to work on not being so critical and harsh myself.

* Keeping up with the news. Don’t think I never read or listen to the news, I do. But I have realized that I lately started avoiding it because I don’t like the content of it. In other words, I become so affected by all horrible things going on in the world, but ignorance and denial is of course not the right way to avoid the problem either... Therefore, I am going to start keeping better up with the news again.

* Train for Paris Marathon. Yep, that’s right. I am signed up for Paris Marathon. And right now that feels like a nightmare. I am training, and preparing but it is 100 times harder than I could have ever imagined. But I’ll do my best to get there! ( Go Sofie!!) New Year, New me... Really? I am not a negative person, but why do we believe that a new year is going to change everything. That our lives suddenly and magically are going to change just because it is a new year? Why do we believe that our likelihood to succeed becomes greater as soon as it hits midnight on New Year's Eve than it was a couple of minutes earlier? Because if you couldn't set a resolution and keep it before New Year's, what says you will be able to keep it now? In fact, your chances to succeed are, in my opinion, even smaller because of the pressure to succeed.

Most people don't succeed to follow through with their resolution because they put to much pressure on it. They set the bar to high and as soon as they slip or make a mistake they give up. Why? Because they feel like they failed and because it is easier not dealing with the feeling and it's tough getting up and trying again. If you call it a resolution you are most likely to fail because as soon as you slip you feel like you failed because you failed keeping your promise to yourself, which is why I don't make resolutions! Instead I make goals.

A goal is something you strive towards. Something you put your energy into getting closer to. Mistakes and slip ups are okay. You are not there yet, but you are working to get there. Let's use the most common New Year's resolution as an example;

"This year I am going to become fit, I am not going to eat any sugar or fast food and lose x Kilos..."

This puts an awful lot of pressure on you, and if you do slip and eat something you are not supposed to eat, or don't workout like you planned you are going to feel like a failure and more easily give up. If you instead make it a goal, for example;

"This year I am going to work towards a healthier me, by eating better and by moving more"

These two examples have the same intention (reaching a healthier you) However, while the goal says that, IF you would slip one day that it is okay because it is a work in progress and you can always continue the next day. Breaking the resolution however, will most likely throw you off guard, and you are more likely to quit because you broke your promise to yourself by, for example, eating a cookie.

I hope I have explained my point of view clearly enough... I am all for setting goals and trying to make a difference and/or a change, but I definitely think we put to much pressure on the new year. Because, you can set a new goal any day of the year, and if you stumble and fall all you have to do is to stand up and try again. You don't have to wait for a new year to make a change. If you start today, next week, or on new years, it doesn't matter, it's just all about starting. And if you "fail" or rather when you do, it's your decision if you're going to get up and try again or if you'll give up. Most successful people have not only failed once but twice. The difference between them and "ordinary people" is that they never stopped trying. So go for it. Whatever it is that you are dreaming about. Follow your dream and don't stop until you reach it.