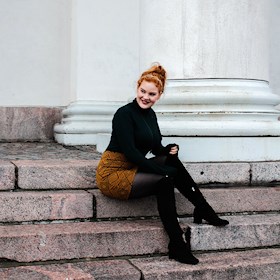 Hey there! I am a busy bee striving to live a more natural urban living, travelling, big cities and small details, food, writing, learning, and so much more. This is where I write my life.

I know, my next post was supposed to be about Thailand. It will come, but last weekend I went to an event that inspired me to write, and I needed to get it out.

Vegemessut- a fair dedicated to vegan food, has been organised in Helsinki for three years now, I think. This was the first time I went, and man, I'm happy I did. The place is full of brands presenting their products, giving out samples and selling their products for cheaper than usual. And all of it is vegan. Heaven for anyone passionate about a plant-based life. There was ice cream, tofu, Tempeh, seitan, cheese, caviar, mayo, pizza, cakes, juices, smoothies, yogurts, steaks, anything you can dream of really haha. There were also other vegan products than food, like clothing and household products.

Why was this so special to me, except for the fact that it was a nice day with a friend and tons of good stuff? It made me realise once more how easy it is to be vegan in Finland, or at least in Helsinki. We have tens of different kinds of plant milks, cheeses, vegan ready-made foods, vegan meats, yogurts, cooking creams, anything you need really, even in smaller supermarkets. And new products are continually being announced by brands, as well ones specialised in vegan products as ordinary ones.

Some might say that you don't even need these convenience foods to be vegan. You don't need to have a substitute for every meat and every cheese, because the earth has already enough to offer without all those processed foods. And it does, but it does make it easier to not have to drastically change your diet at once, and also, sometimes those vegan soy burgers are just easier than making your own bean burgers from scratch when you're busy. Ideally I would eat a whole foods diet without processed foods, but personally, I like comfort and doing stuff the easy way sometimes. Also, in Finland many of our fruits and vegetables are imported from far away at least part of the year, so an all natural diet isn't perfect either, if not in the health-related questions, then the environmental ones.

As some of you might remember if you have read my blog for a while, I used to be vegan. My vegan time lasted for half a year, after which I went back to vegetarian because I didn't want to label myself with something that someone else has defined as well as something I know I cannot completely achieve thus making me feel insufficient all the time. So I decided to simply call myself plant-based, which I still do, but I realise I slowly went back to using more and more dairy and eggs. Even if I don't even like dairy or eggs! Except cheese and chocolate. Vegemessut made me realise I really don't need cheese and chocolate in my everyday life, because there are so many other yummy things that are vegan and just as easy to find in Finland as cheese and chocolate.

I won't start calling myself a vegan for the same reasons that I stopped it before. I will eat vegan at home and vegetarian in the situations where veganism can be a bit tricky, because I don't want it to require extra efforts from myself or others. Eating should be natural and enjoyable, not a puzzle that you need to solve before getting to it. But veganism is not only a diet. It's a way of life, certain predefined values and also, especially with social media, a community. I respect those values and that way of life, and for a big part, I can say that I follow them too. But I do it in a way that is fit with my own way of life and values. To me, there is not one way to be vegan but everyone has their own. Still, some people think that if you sometimes eat or use animal products you cannot call yourself vegan. Well, that is your way of seeing it, but I think veganism goes deeper than just the obvious things on the surface, like what a person has for lunch at work.

However much I want to think that one can be vegan even if they can put their personal life choices aside for a moment and eat they're mom's cheese risotto with a smile because it tastes good and she has put an effort into serving something nice, and veganism is more about the wider ideology and values than single choices, that is not the most common perception of it. So, like before, I will still opt for the more neutral term plant-based when explaining my diet, even when most of what I eat is vegan. I don't want to step over other's beliefs and don't want them to step over mine, so I'd rather choose terms that don't conflict with the definitions of others whenever possible.

I mostly talked only about food in this article. I know veganism includes also all other areas of life, and in those I am even less vegan than with food. I do try to opt more and more for natural and vegan options in everything, but I am not there yet, and sometimes a beautiful lipstick containing chemicals and beeswax does win my heart. Sorry about that, but that's me. Life has to be fun and relaxing as much as possible, and I want to live in a way that makes me that. Vegan stuff makes me happy, but sometimes chosing an easier option might make me happier due to circumstances. It doesn't have to be strict and serious, because that will just annoy you and take the joy and passion out of it. At least it did for me. So live like you feel good, without caring too much about what other people think. You do you and that's enough.

Long live seitan and have a great day <3