PalomaThe pleasure of finding things out 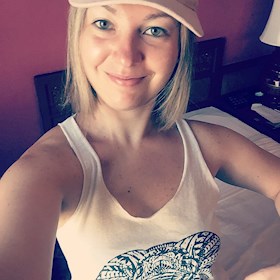 It´s difficult to start writting and try to find deepness in life when you have been partying all time long. I wish I had written every single feeeling and every single important thing that happenEd to me in this first month living abroad but instead I decided to live my life as always wanted: happy, free and without feeling guilty

People sometimes underestimates the power of living in a pretty place. I can say that the happiness that I´m feeling in largely explained by that. I don´t know why Muna chose me to live with her, I justed posted an advertisement in Spareroom when I was still living in Mexico mentioning that I was a MBA student moving to London in August, that I was looking for a quite place with tidy roomates and that I love music and football. After a couple of skype phone calls we made the final arragement and it couldn´t have chosen better. I live in West Hampstead in a beautiful mansion brick building, with a beautiful garden and a house full of art, books, a piano and two guitars. Muna always puts jazz music and she is great. She loves cooking, reading, she has a lot of culture and can talk about every single topic. Her parents are from Sudan but she was raised mostly in different countries such as the United Kingdom, Lebanon and the United States. She has a great understanding of life and her cultural intelligence is superior.

George is Muna's boyfriend and he is completly different . He is from Rumania, doesn´t read at all, he loves football and works in the construction sector on his own. He comes from a wealthy and educated family but he never liked to study. He was more into playing soccer and he was told to go to college he just told to his parents that he didn´t want to waste their money so he used the money to move to London instead. He has worked for many different construction companies but in the last years since a lot of people alrady knew him he decided to work under his own time and own rules. People call him every single week to make some jobs and I understand that he is doing good money. I like George, he feels proud of working in the construction sector and loves Muna. He was married before but only for three months. He is a good looking guy that eats all the time. He asks Muna to cook for him and he loves watching Britain´s Got Talent.

About the school I must say that Hult has exceeded my expectations because they were set up very low from the beginning.  I have only took few classes but they have been fun and I have enjoyed the interventions of my colleagues.  I have already made good friends with Kelsey from Kentucky, Esteban from Argentina, Elia from Turin, Jelena from Croatia, Macabee from Chicago, Melisa from LA, Rebeca from Germany, Aziz from Mauritania, etc.  I can´t name them all but so far  I guess that these guys have been my favorites.

I am in Team 5 and I will be working until December with David and Philip from Colombia, Aliah from Yemen, Yi from China and Erick from LA.  We have just delivered our first assigment but I´m pretty sure that we will do it fine as they look responsable.

There is a guy in the program that is great.  his name is Morten, he is from Denmark, his english is perfect and he has his own rockband and had taken stand up comedy classes.  He is so funny and intelligent that makes me wonder if he has more cousins or single friends for me in Denmark that are alike. He reminds me a little bit of Steve (a guy I  dated in Mexico) but cooler.  Steve is not as funny and as natural as Morten but they share some things. They are both tall and blue eyes, they have their own rock bands and are entreprenurs, the difference is that Morten seems to be a good person, he is happily married and I don´t think he is an asshole as Steve is.  Steve has the Peter's Pan complex and Morten seems to accept aging better.

I could say that the best moments where,

2) The greenwich day.  I enjoyed every single moment of this day.  a) The moment when Elia misunderstood the meeting point at Embarkment tube station and he headed somewhere else and then when he didn´t wait for us and decided to move again to the meeting point when Macabee  and I had just left b) The way Macabee and myself tried to make Elia laugh so that he didn´t feel bad about the communication  issue anymore when we finally got together, c) The openess of Elia and Macabee to talk about life but also to joke and laugh like if there was not tomorrow, d) the inception about and interesting business idea.

3) The interview in Wembley.  I got interviewed on national TV to talk about the spurs and heir champions league group

4) The mexican party.  One of the best mexican parties I have ever attended.  I saw old friends such as Chocoreto, I met Rafa Barrios, I made new friends and I even met a greek guy has been asking me to go out but I have not met yet as I have been busy making other plans.

5) The day out with Alfonso.  After more than 10 years of not seeing Poncho I saw him here in London.  He is a great friend from college and a very succesful private equity and asset manager professional.  He is smart, talented, handsome and the party animal himself  He is like the suits' Harvey Specter character.   He has been single for the last 6 years after he got divorced but now he is starting a new relationship with someone from Mexico. That girl is lucky to have him.