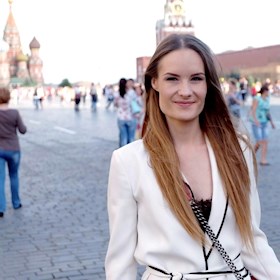 A Swedish girl living and working in Moscow. With humor and honest authenticity Olga shares her experiences as a career girl and soon to be mother (after several trials of IVF) with lots of inspiration in self-development, leadership and personal branding, all mixed up with her passion for Fashion, Health and Beauty [email protected]

I haven't complained much about the pregnancy, having no physical trouble, but this insomnia is killing me! I can't get grip of what actually causes it - is it the hormones and the pregnancy itself or is it the lack of routines and a vicious cycle of not doing what I have planned and then having anxiety over it.

Walking around in week 39 without much sleep makes my abilities quite limited. Before going on maternity leave I had this vision that I would update the blog every day and that I would be much further in my Project than I find myself being. But these two creative tasks turned out to be very hard to manage without sleep. And now I feel bad for not doing what I've planned. Plus, I realise there will not be much more sleep after the baby comes. I also think I'm a bit affected from having worked in marketing, thinking you guys would only be interested in positive blog posts with nice pictures and how great everything is. I started this blog with the intention of being honest and authentic, but yet I'm only sharing the honest "nice" moments.

I've realised that this is the first time in like 25 years that I have not been living and doing things under a schedule someone else has planned out for me. It's been a constant lap of school, Uni and work that has been dictating when I should get up, where I would go and what I would do for the rest of the day. The two free days we call weekend as well as vacations, were also scheduled to not relax to much before getting back on the schedule. I thought it would be so awesome getting out of this institutionalisation, but turns out I can't really handle it. In the absence of a better description, it feels like I've just happily broken free from a dictatorship but then finding myself missing it as I don't know how to live in the free world.

I know this far in pregnancy I should rather just relax and take a chill pill, instead of obsessing about not doing what I've planned. But what if you're a type A person with a constant minimum production requirement?