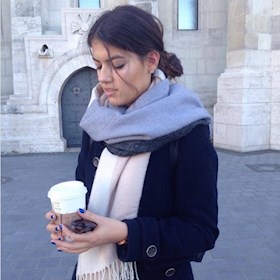 Hey there! Welcome to my blog. Here it's all about fashion, faith, food, travel, inspiration, and heaps more. I hope you enjoy reading Hello again! It's me Claudia, for the second time this week!

One of my goals for this week, was to write a blog post everyday this week. So 7 blog posts in 7 days, wow thats probably how many I've written altogether haha. SO thats the story. Todays post is October inspired. Since it's the beginning of my favourite month, I thought I'd write this post all about October. I also want to tell you the reason to the name of my blog, since duh its got "October" in it.

The picture above was taken by my sister, last year October in Budapest. It's one of my favourite photos.

October to me is my birthday, autumn, a cup of spiced tea, leaves falling and just cozy blankets, sweaters and good vibes. I am looking forward to gorgeous days ahead.

STORY BEHIND MY BLOG NAME

Octobrebaby - this is my blog name. I came up with it because of a few reasons:

2. Then there is also this movie called "October Baby" (so maybe the name wasn't so much made up by me) but anyways I love this movie sooo much. It is based on a true story and is so emotional and touching. It's about a girl who's life is turned around when she learns she is adopted and a survivor of a failed abortion. The movie sounds pretty deep and serious, which it is, but once you've watched it you'll get just how great it is.

3. Last of all; I love french! SO random, I know. But since I learned french in school, and I was always obsessed with french quotes, although I hated actually studying for it, my blog name is french inspired. October is Octobre (with an 're' instead of 're'), in french. I know its not much difference, but its cute to me :)

That's all for now. See you tomorrow! This is my first and official post. I’m very new to this whole blog thing! I’ve wanted to have a proper blog or make videos for quiet a while now, and so I guess this is the beginning of my ‘blog journey’!

Keep on reading if you are interested to get a little more about me!

My name is Claudia. I am from Australia, although currently living in Europe. I am a student and speak two languages fluently; english and german.

This blog is all about the passions I have, some of which I just listed above, others you will get to know by reading future posts!