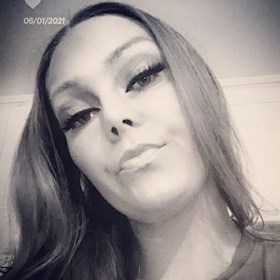 I am French & German royal family. Naildesigner, Reiki Healer & Dream interpreter - Clearvoyant. I live in Norway, where I was born. I am interested in Partners, so contact me on telephone +4748596602, or [email protected] I have over 5000 followers on Snapchat.

I am at my aunt Ingers place. I am starting to loose my ability to hold on in feeling. It's like I am trying to avoid being possessed, but it's hard to not let go because it got a hold on me. I feel annoyed.

The first thing she does when she notices that I have difficulties hanging on, she touches my vagina, I think about my hair on the vagina.

I saw a clip about a ghost that haunts a home, and the way he was, was the way I starting to turn to. Loss of feelings, loss of care, loosing my grip and meaning and sense of self. Loosing control on the feelings.

I were specially cold and it was about the status around the table.

Like they didn't even notice me at all. Nina also gave Christina the sexual healing in front of me. She didn't consider how wrong that was to me. I didn't like it. I feel left out. It's a weird situation that she gave to Christina instead of me.

I'm going to some place from home, and when I'm going back it's difficult finding the way home again.

I knew the same way, and tried a new way, but the new didn't work I had to turn around and go back to where I changed route. And I went back to the old way, and I reckoned I was gonna find the way back home with following the first road. And I knew I was gonna find home after changing route. I walk up a near 100% vertical street, holding on to a railing that I pull myself up with.

I have noticed it's is a white and brown kind of small cat that follows me - in dreams, on video, in real life, and it looks like a cat I tried to scare once. I banged the windows, and after that he has started to appear many different places. The same cat. Many different places. On my phone.

I'm a diver doing Swimminghall training. I am with my trainer and all I need now is a fitness pool with foam boxes in to practise my backwards somersault. We were around the pool, and I wanted to be in the drypool, not the wetpool.

I have a new drypool design, a new element to produce. It's a new kind of dryhall with trampolines in the floor, foampool with side boxes made of some softer and harder material both combined to make a hard but soft enough box to leap from.

The home I grew up in were a big house with a lot of space in. It was different. There were room for stuff in the corners, and I counted sleeping-rooms, there were over 5 sleeping rooms.

I ate the old candy that my grandmother had to make the kids do what she wanted with it, and replaced it with new.

My grandmother sold this home because she was hip-sick. In the new apartment she operated her hips and got plastic hips instead of her normal. They hurt so much so she had to.

It was a very rare home. The adults renovated it, took away the door entry in the basement. It felt much safer when that door was closed for good. New walls were put up, and the floor wasn't finished but started on.

I am thinking about sueing the government for not giving me a fostercare home from when I lost my mother, and when they knew my dad used drugs. All I had were my grandmother that was there for me, if she hadn't I would have been noticed in school for not having the right care at home about me.

My dad used drugs everyday. He was violent. He threw things. He slammed doors. He used syringes. There were syringes in the toilet. He smoked hash inside so it smelled all the way to the stairs to first floor. He sat in second floor and did drugs with his friends.

I am embarrassed. I shouldn't have lived there. I think the child services misunderstood when I said he is upstairs, I think they misunderstood it as up and going, and doing the right thing.

Because he didn't. And they should have realized what to do with me. I know I thought it might be even worse to move me to a fostercare home, but they should have considered how wrong a little girl that knows nothing about that would have.

I understand I thouoght that so strongly that it might be all my fault that they didn't give me a fostercare home. I was so sure that it was gonna ruin everything for me. But everything was already ruined.

This home, this family wasn't normal or good enough. Sitting in front of the tv, and not talking, not evolving me, not doing anything togeter, and that was it. That was my childhood. TV with my grandmother.

No information, nothing we share, not that we are special, living or learning. It was trust to Dr. Phil, Days of our lifes, Ricky Lake, Glamour, Macgyver, LAPD Blue, X-files, Friends, and Iceskating. That's what we did together in my family. We watched tv. We didnt laugh, watch, or live. We sat still. We didn't talk. We watched TV.

She should have thought about the difference. She should have said. I went to springboard diving to do something. To have some side action than being lonely living at home.