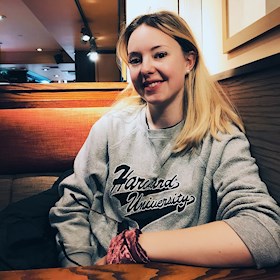 One thing that I have realised about living alone and in another country is how lonely you can feel at times. You can live in the most lively, biggest city in the world and still feel so insignificant. That's what happened with me in London. My health was deteriorating, and I was freaking out. I would stay at others' places overnight because I was so scared of being alone. There were, and still are, so many times where all I needed was a hug and someone telling me that everything was going to be ok. But I only had myself to turn to. I was solely relying on myself to make the right decisions, and that is the hardest thing I have ever had to do.

For someone that has always been very family orientated, and had few very close friends, I am still adapting to being physically without them, even if this has been my reality for two years now.

My anxiety in collusion with feeling lonely is what really brings me down from time to time, and I am still not sure how to cope with it. I'm not sure I ever will know. At the same time though, I have still not packed my bags and moved back home, so I guess I must be doing something right.

All I know is that next time I move somewhere, I am going home ♥️ In 2013, when I was 16, I made up my mind. I decided that I was going to move to London and study when I had graduated. I did my fair share of research, and I applied to a university that I thought was good. A few weeks before I was supposed to leave Sweden, I got an email saying that the university programme had been discontinued. I was then recommended to go to Brighton instead which I did in September 2015.

I seem to refer to Brighton as the point in my life where everything went downhill and horribly wrong for me. I was dealing with deep emotional and mental issues. Was it all self-inflicted? It might have been. I still have problems with dealing with stress and emotions. However, I made it through alive and I came home to Sweden with distinction grades from college. I came to Brighton with the sole purpose to study and succeed, which I somehow managed to achieve even though it was in many ways the roughest period of time in my life. After I left, I never wanted to come back.

I decided to take a break from everything and try something completely different for a while, and that is how I ended up in Madrid. I look at Madrid as one of my main achievements and the turning point in my life. Before I went there, I thought I knew Spanish. When I came there, however, I quickly realised that I did not know as much as I thought I did. I spent three months in a country where I knew the basics of the language and where not a lot of people speaks English. Although, life in Madrid was so easy compared to Brighton, and I was slowly but surely starting to heal.

After having given myself a break, I thought that now would be the time where I took the bull by its horn and throw myself out into another, more professional, adventure. I moved to London. I was tired of studying and I wanted to try something new for a while. While I was super depressed in Brighton, I used to go up to London all the time to clear my head. At that point in my life, a stressful environment is what I needed to help myself from my thoughts and anxiety eating me up from inside. After having dealt with and moved on from a lot of the things that went down in Brighton, a stressful environment is not what I need right now, which is where it went wrong. London is stressful. London is expensive. London is crammed. It made me ill. I was not happy with my situation, and after three months I knew I had to do something about it.

I moved back to Brighton, and I must say that I am proud of myself for coming back even though, as I said, Brighton was the hardest time of my life. I could have chosen not to come back, and let the Brighton feelings that were still undealt with make me feel sick. But I didn't. In some way, I learned that the city itself had nothing to do with what happened here. Some minor issues and obstacles are better left behind in life, but whilst living in London, coming down to Brighton and dealing with the past step by step, was the best decision I could have made right then and there. For once, if not the first time in my life, I feel like I am on the right track. I live in an amazing house, with great people, and I wake up every morning going to a very interesting and challenging job, which I love, where I know that I can go further if I keep working hard. I feel very happy, which is a feeling that I have had to fight quite hard for.

I can still be an emotional wreck, I still make wrong decisions, people are still looking at me asking what the hell I am doing, but who cares? After having lived in and visited so many different places, spoken different languages, met so many different people, going through both hard and happy times with no one else than myself to rely on, I am doing just fine. I have learnt the importance of holding your head high and be proud of yourself and your achievements, as I can be quite hard on myself. I guess my way of living life is living and learning. I am not afraid of leaving everything behind and trying new things. For me, that is my way of living life and growing as a person. However, now is the time for me to finally relax and find peace in where I am at in life, and I know that Brighton is the right place for that. This morning I woke up, got ready and went to the tube station. 45 minutes later I got off at Gloucester Road which is my favourite area in London. ♥️ It was cloudy, windy and quite cold but regardless I love walking around there. After having been to Harrods and having lunch outside, I went to Hyde Park when the weather suddenly changed and it was now sunny and warm, and it really felt like spring with all the flowers blooming. ☀️ I love London in the spring. Everywhere is so pretty. Celebrating the arrival I spring, I went to Zara and bought a coat. I have been wanting one for so long and I found the perfect one. It was expensive but it was worth every pound!