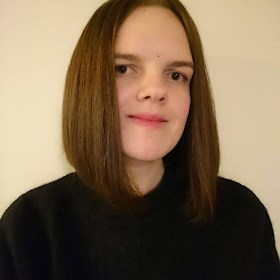 livchristinehoem
Liv-Christine Hoem. 22 år gammel poet og forfatter fra Drammen, som skriver åpent og ærlig om livet mitt på godt og vondt.
I do not know where I am or where I have ended up. All I know is that I meant something to someone.

This is how my story starts. I see my life in replay and my childhood flies by. In particular, one memory is stronger than the others. There is a woman with blond hair and a floral dress, who laughs with a crystal clear laughter. She smiles when I come running towards her and I throw myself into her embrace. The embrace only lasts for a few seconds, but I remember this incident as one of my earliest childhood memories. I cannot have been more than two and a half, yet this woman was one of the dearest things I had.

At the time her face was bright, I remember how she smiled and how she hugged me when I needed it. One day her smile was no longer there, her skin was pale, she was thin, her hands were shaking. When I tried to hug her, it smelled strongly of alcohol. One day when my father had picked me up from kindergarten, she lied on the couch with bottles of beer and wine all over the place. I ran up to her and tried to wake her up, but I failed. I shaked her shoulders, almost hit her in the face, but she did not wake up. My father tried to pull me away, at first he did not manage, but then he took a strong grip around me and sat me down in my bedroom. I remember my father trying to wake up my mother several times, he tried to talk to her, but it did not work. I did not know then that she was gone, but the years that has gone by afterwards, I have been told what really happened.

It feels a long time ago, as if all that is left of her is a shadow, or not even that. She is not here anymore, and it feels like I am not either. I remember when this woman took me to my very first day of preschool. She held my hand and squeezed it hard. I think she must have been more nervous than me. When we were separated she hugged me, and I could see that her lip trembled.

“It is all good. Just go,” she said and smiled nervously.

I smiled back and waved before I ran to the other children. It was suddenly quiet when I came running into the classroom. I could not really see why. Some children in the back row giggled quietly as they glanced mischievously at me. I stood there for a while, until I saw an empty desk and sat down. The clock on the wall ticked slowly towards half past eight when the hour was supposed to start. I was quickly pulled out of my own thoughts, when the teacher came in and closed the door behind her.

“Good morning, children,” she greeted as she looked over the class.

“Today is your first day at school, and I think that we should use this day to get to know each other.”

I noticed that the children around me began to talk. I looked up at the teacher; she stood there quietly and shushed on the children who were yelling.

“Now it is enough with all this trouble,” she shushed.

“Let us rather make a name game, and get to know each other.”

All the children went out on the floor and stood in a ring. I remember it particularly well. I came next to a girl with pigtails and a bright red dress. She took my hand and smiled. I smiled back.

“Everyone should say their names one by one,” the teacher said:
“Ine, Henriette, Ole, Anna Bella, Sophie, Nils, Thomas …”

I remember my stomach knotted up, when it was approaching my turn. My hands began to tremble, I tried as best I could to keep it in check. I would really not want anyone to notice that I was nervous. The teacher pulled me abruptly out of my own thoughts again.

“May you say your name?” she asked friendly.

“Who, what, I …?” I replied, confused.
The other children started laughing. The teacher nodded at me.

As I was saying my name, I did not produce a sound. My voice was gone. I tried to clear my throat and cough, but it did not come back. Several of the children broke out into laughter.

Fifteen years later we met again at a reunion party. They recognised me, but did not meet my gaze. Some of them came up to me and it is rare I see adult men to tears, but it happened that is.

“I am truly sorry for everything and wish I could take it back, but I cannot. Nonetheless, I hope you will forgive me,” they said in turn.

I must admit I was overwhelmed and I really had not expected them to come over to ask for forgiveness. I had one voice inside that said that I should forgive them, yet there was another voice that said I should not. I thanked them for their words and never saw them again. In a way I thought it was too late coming back fifteen years later, because they wanted to be friends. On the other hand, I think it was brave of them. The rest of the evening I hung out with my real friends; those who always had been there for me and who supported me through the ups and downs.

It was night. The party was long over, and I went out on the porch with a glass of champagne in my left hand. The moon shone bright and clear. I sipped champagne and thought of the evening’s events. How my life had been and what I had achieved. Even with my experiences I could feel tingling in my body of bliss. Whether it only lasted for a few seconds, I knew that I had meant something to someone.

I wake up and it is dark. I hear the song from my own funeral. Every bench in the church is full of people who once meant something to me, and people I have meant something to. I do not know how long I have been here, or how long it will be. There is no time or place.

The sound of singing grows from the floor and up in every corner of the church, through their tear-stained faces and down in my cabin. The priest faces the assembly. I see all the flowers, eyes closing; I hear the sound of singing being slowly erased.