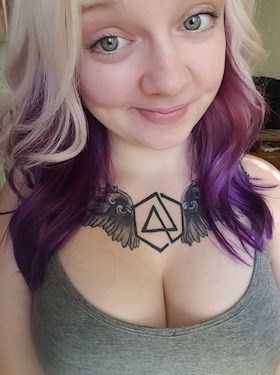 Hello, my preziouz ones! This is the story about the Sparks family. It's my first legacy story; I hope you'll enjoy it.

Gaia was walking through a park she found near her house in Windenburg. She had just moved in and was feeling a bit morose since finding a roommate was proving to be more challenging than she had previously thought.
With a huge sigh Gaia plopped down on a park bench. How am I going to make rent this month?! she thought.
Gaia picked up her phone and dialled her best friend's number. Maybe she can help. "Hey girl! What's up?" said the voice on the other end.
"Hi, Dina. Nothing much. I'm still trying to find a roommate for my new house in Windenburg," Gaia sighed again.
"Still? Is there anything I can do to help?"
"Not unless you know someone who's looking for a place to live in Windenburg, but can't afford to pay the rent by themselves - like me."
"Hah! I can't believe I didn't think of this sooner," Dina burst out. She sounded giddy with excitement. "I actually have a friend who meets your criteria."
"Really?!" Gaia said enthusiastically.
"Yeah! He's a cheerful and outdoorsy guy..." Dina started, but immediately got interrupted by Gaia's panicked voice.
"A guy? You want me to move in with a guy?"
"What's wrong with that? He's super nice and funny. If I were in your situation, I'd love to have him as my roommate," Dina said encouragingly.
"But moving in with a strange man... I don't know..." Gaia still hesitated. "What if he tries to hit on me?"
"Haha, Gaia! You're such a prude! But don't worry - I'm pretty sure he's gay. He won't bother you in that way."
"I'm not a prude," Gaia protested. "I just haven't found the right guy for me yet. And are you positive he's gay?"
"Yep. I'm like 99.9% sure. Otherwise, he would've hit on me already," Dina said with an air of confidence.
Gaia shook her head, laughed silently and replied, "Not all guys want to hit on you, Dina."
Dina scoffed. "Why wouldn't they? I'm F-I-N-E," she said cockily, emphasizing each letter of the word. "Anyway, I'll text you his number, and I'll ask him to come over to your new house tomorrow. Maybe you could have a sleepover first? Think of it as a trial run."
"Sure, I can agree to that. And thank you so much, Dina. You're the best!"
"I know, right? Oh, and his name is Ouranos, by the way. I totally forgot to mention that," Dina laughed. "Laters!"

Gaia said goodbye and hung up the phone. Ouranos, she thought. What an interesting name.
"Ouranos," she said out loud, trying to get a feel on his name. "I sure hope this will work out."

The following day, Gaia was standing in front of her bathroom mirror, trying to prepare herself mentally before meeting Ouranos. What if he won't like me, or if we won't get along? What am I supposed to do then? she thought worriedly, while biting her lower lip, like she always did when something was making her nervous.
She was pulled from her thoughts when her phone made a chirping sound. Oh my God, a text! Gaia started panicking. What if it's him?!
It was. Oh my god, he's here! He's here! What do I do?! she slapped herself on the cheeks, desperately trying to calm herself down. She took a long, deep breath and descended the stairs.
There was a knock on the door and Gaia felt her heart jump into her throat. This is it, she thought. The big reveal. Stay calm. She took another deep breath, opened the door and stepped outside.

The first thing she noticed was his purple hair. Wow! He's got purple hair like me. But his looks a lot nicer, she thought. "Hello there, I'm Gaia. It's so nice to meet you!" she said welcomingly. She extended a friendly hand. He likes handshakes, right? She was so nervous, doubt was entering her every thought. He took her hand in his. His handshake was warm and firm. He seems so confident! she thought. Not nervous at all.
"Hi, Gaia. My name is Ouranos, as I'm sure Dina's already told you. Thank you for giving me a tryout to become your new roommate," he said gratefully.
"A tryout?" Gaia laughed "Dina was right when she said you were funny."
Ouranos gave her an easy smile and chuckled. That smile really took Gaia's butterflies away. It seemed like they had an instant connection. They spoke to each other like this wasn't in fact their very first encounter.

When they were done greeting each other, they both fell silent, not knowing where to go from here. Without realizing what she was doing, Gaia locked eyes with Ouranos. She gazed into his soft gray eyes. They were almost multicolored with a yellowish center. They reminded her of the ash remnants of a roaring fire, but at the same time, they were calm and kind. Reliable. His eyes set her at ease. Maybe she could live with him after all, even though he is a guy.

She must've stood like that for about a minute, when Gaia suddenly regained her ability to speak.
"Ehrm..." She cleared her throat awkwardly. "Would you like a tour of the house?"
"Absolutely!" Ouranos' beautiful eyes lit up. It was as if he wasn't even fazed by her momentary lapse of judgement.

Gaia showed him around and ended the tour by pointing to the bed with the freshly made sheets, where he was supposed to sleep that night.

Then, they went outside to enjoy the beautiful weather, and talked for hours. After some time, they were finally interrupted by Gaia's growling stomach.
"I'll answer that by saying that I'm also starving." Ouranos said with a laugh. "Would you like to go out to dinner with me?"
"I'd love to," she replied, without even thinking about it.
"Great! I'll go and freshen up right away!" Before she had time to answer, Ouranos' big and muscular arms were around her in a tight, but lovely embrace.
Gaia's heart started beating like crazy and she felt a bit dizzy.
"O-ohh," she stammered. Ouranos broke off the hug with a worried look.
"Oh, I'm sorry," he apologized sincerely. "My family is a family of huggers," he explained. "Well, the family I live with, I guess I should say. I really don't know about my biological family since I was adopted."
Gaia, who just got her tongue to work again, replied, "That's all right. You just surprised me. Should we go and get ready, and then meet here again in 30 minutes?" she said to divert their attention away from the hug.
"Sure. I'll see you in 30 minutes." Ouranos turned to leave, but spun right back a second later.
"Oh! And it would be amazing if you could dress a bit formal. The restaurant I'm taking you to is kinda fancy," he said with a seductive little smile. That smile made her heart flutter in a way she hadn't felt before.

Hello, my preziouz ones! (Catch phrase - yes or no?)

So, I'm a total Sims nerd, and while I wouldn't say that I'm good at the game (I'm not even sure it's a game where you can be considered good or bad), I would love to share my adventures with you. I'm currently playing The Sims 4, and I created a family: the Sparks. I thought it would be fun to make up a whole story about them. So here I am; about to give it a try. I'd really appreciate if you could give me some feedback about it, that way I'll know if I should continue with this project or not.

Note: I apologize beforehand, if the story might feel inconsistent or "jumpy" sometimes. That's because I'm new at this and I'll probably forget to take pictures of some monumental events in the Sparks family's lives. Hopefully, I'll get better at this as the story continues.

(EDIT: After getting some feedback, I've now made some modifications to how I'll tell the Sparks family's story. Please let me know what you think.)

Now, let me introduce you to the Sparks family! Gaia Sparks is a romantic and family oriented foodie. She has just moved to the Havisham House in Windenburg, and she's looking to find her soulmate. Gaia is an orphan without any other living relatives. Since she's very low on funds, she must find a roommate to live with in her new house.

Let's hope that the Sparks won't stay a one-person household for long.

Down below, you'll find an overview of the series. From there, you can choose which part you want to read.

Hello, my preziouz! (Could it be my new catch phrase?)

I'd love to hear what you think about my category headers. There are four of them now. I know I haven't posted anything that would go in the 'Crafting' category yet, but I'm getting there. So, please share your opinions with me.