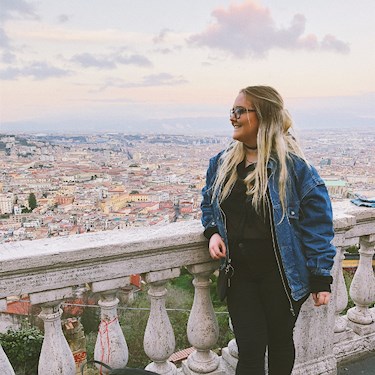 Swede lost in Amsterdam, currently studying at Hotelschool The Hague. Loving life, exploring as much as possible and trying to make every day an adventure. Previously lived in Rome, Italy and the U.S. for a few months.

Time is flying by guys! In a way I'm happy that it is, because I really can not wait to get back to Amsterdam. And I can not wait to finally get to go home to Stockholm for a few days. But at the same time... I don't have much more than 2.5 months left in Italy and that stresses me out a bit. There is still so much I want to see and do. The last couple of weeks I haven't really done anything about that though haha. I was home for a few days with a nasty cold and last week I spent every minute I had off from work on studying. In all fairness, I don't have much interesting to tell you right now, I just felt like giving you a little life update, so you know that I'm still alive. I switched department the other day, so I'm now doing breakfast and lunch in the restaurant. Which means waking up at 5:30 every morning. For those of you who know me, know that this is a disaster. I am NOT a morning person. On the other hand, it means that I'm home around four in the afternoon, which gives me a couple of hours of daylight to actually go and explore. When I have the energy. Which is not often. Anyhow, I'll give you a proper update in a couple of days when I have a day off. Until then, take care! Hey there guys, I know I know... it's getting a little old reading "long time, no see" here. But hey, life, you know. Sometimes I have tons of inspiration and energy but then there's times like now, when I feel completely drained of both. With that said, since I've spent the last couple of days in bed doing nothing due to the cold of the century, I figured I'd entertain myself and you by telling you about a little weekend trip I did last month. My friend and roommate in Amsterdam, Carlotta, came to visit from her internship in London and I got a couple of days off from work so we could go exploring a bit. We spent the weekend seeing Bologna, Florence and Pisa, but telling you about all of it in one post would take forever, so let's start from the start and let me introduce you to incredible Bologna! Around midday on Thursday, we made our way from my apartment in Rome to Termini, the central station. We got our tickets for Bologna and after a quick breakfast, we were off! A couple of hours of traveling later, we arrived in Bologna and decided to walk to our hostel. Guys, if you ever go to Bologna, I give Dopa Hostel my warmest recommendations! It was my first time staying in a shared room in a hostel (been a little spoiled when it comes to travel habits) but it was such a cute place, really nice staff and cool vibes. And they had a guitar you could play on so what more can you ask really. Anyways, we got settled and then walked towards the center. We sat down for an aperitivo on a big square, did some shopping and had dinner on an outdoor terrace on a little side street. This super cute British couple bought wine for us and had us trapped in amazing conversations for a couple of hours. On our way back, the atmosphere in the city was amazing. During the day, the city had felt a little dead, but now all the quiet streets were bustling with people and energy. I'm sure it could have resulted in an amazing night in the city, but honestly we were completely exhausted and went to bed instead. On Friday, we decided to climb this big tower. I almost died, but 498 steps later, it was totally worth the view. Really, it was breathtaking. We didn't do much more in Bologna other than rush to our bus, which we missed. Waiting for the next one we went to a big market and I found the jean jacket of my dreams for only 25 euros, so I guess that was worth missing the bus for. Anyways, Bologna completely surprised me. I basically had zero expectations before going, but it was so worth it! I really loved the young and lively atmosphere in the city. It was so freaking cute as well. I would travel super far to see it, but if you're ever close by I would definitely recommend paying a visit to this place. I'm done rambling and my fever is telling me it's time to sleep, so I'll get back to you with the next part of this trip as soon as I have the time and energy. Might be tomorrow, might be in a week. We'll see. Until then, take care of yourselves and don't forget to live life now.