Jackeline PålssonNaturally funny cause my life is a joke 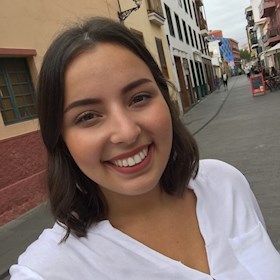 Another perk of having Thailand as my destination is that we have to go to Kuala Lumpur for our visa run. Since the one we got back home in sweden only lasts 3 months, it was that time again to go and get it renewed for the rest of the season. (writing this now, I've actually been in thailand for 5 months now, I'm just a slow updater hehe)

So 3 months in we took the flight to KL in the afternoon, quite a short flight, and going from Krabi airport which is the shittiest airport (after rhodes) to land in KL's airport, my oh my. IT was AMAZING! It was huuuuge, and it had so many floors and gates and stores. Felt like the airport was in the middle of a shoppingmall. I mean they even had a H&M at the arrival hall?! Hallelujah!

We got in a taxi that drove us to the hotel which was right next to a whole street full of street food, which ofcourse smelled very much. And im not much for street food. But we had hopes of the hotel being better then that -can I just say that you should never get your hopes up.. We had been told by my other colleagues that went before us that the hotel would be shit, and it did not disappoint haha. But trying to stay positive we just went out quickly to grab some food and then got straight to bed. BUT CAN I JUST SAY HOW CHEAP KUALA LUMPUR IS?!?!! Since I hate trying new stuff when it comes to food, me and Ida found a KFC at the end of the street food street and I thought - hallelujah CHICKEN! I was starving and I was in heaven, so me and Ida went cray cray and kind of bought everything on the menu and brought it back to the hotel for some late night dinner.

Morning after we had to head to the embassy to sort out all the visa stuff we actually came there for. The only thing is that I apparently didn't read our interary properly, and I didn't realise we had to be at the embassy like 1h 30 min before they even open - just to queue since they only make around 30 visas per day. And guuuurl there was no seats no nothing, we just had to stand in a line for that time. FML for real. Thank god I had my headphones with me and found free wifi #netflix <3

After all that stuff was sorted it was free time the rest of the day, and boy was I excited. I haven't seen a proper city in ages, and I am a city girl at heart. Most people took a taxi in to town but me and Ida wanted to explore and walk around and so we did. What we didn't realise was that we actually were a bit far away from the town hehe but we finally managed to find the petronas towers! And it had this really nice garden in front of it where you could go for a lovely walk. Then the shopping began. And this shopping center was BEAUTIFUL. After a couple of hours of running around in stores our feet hurt like a mothertrucker and then we saw the movies. We thought hey! why not! it's only 14 o'clock. And they were showing pitch perfect 3! But the best part was that it was sooooo cheap! It only cost 15 SEK per person to watch the movie! And this was like a proper cinema with all different kinds of flavours on the popcorns!

After the movie and loads of shopping we went back to the hotel and got ready to go to the sky bar which had a view of the petronas towers, and sir I was NOT disappointed! We met up with the rest of the girls we travelled there with to have a fancy drink at the top. And the DJ was AH-MAZING, he was playing some real old school tunes like sean paul, beyonce, ne-yo ERRTHANG. Loved it and I didn't want to leave. Then me and Hannah decided to join the other team from Phuket on a few drinks down town. I thought when in Kuala Lumpur! Need to see what they have to offer. I was a little bit disappointed so to say with the nightlife. There were alot of boys out and barely any girls, and not in a good way. Like it was a very weird vibe, everyone was staring like we were aliens. And in one of the bars we entered everyone applaud to the bouncer because he got us in.. So we had one drink and then BYE, went to the next one. We went to a few bars, the music was good, drinks quite bad, but the girls I was with basically made my night.

Early morning and we headed back to the airport to fly back to Thailand with our renewed visas. Kuala Lumpur was exactly what I needed after only have seen buildings not taller then 7 floors for a couple of months.

To sum it up, I really liked KL, definitely a place I could visit again, like the mix of all the high buildings mixed with all these gardens everywhere - A concrete jungle for sure! 2017 has been a real rollercoaster for me. It has had it's ups and downs but mostly it's been uphill! I have had the absolute pleasure of starting of the new year with the wonderful squad of puerto rico in GC. Then coming to Rhodes and meeting my new family, whom I cherish sooo much! And after an amazing summer with the Faliraki mafia I got to move to Thailand to start my life as an asian.

This new years started of with the classic sunday airport shift, 3 arriving flights and 3 departing flights. And boy was it busy.. After a 9h shift I came home and took a well deserved nap, then got ready for the new years dinner with the team!

And I'm so lucky to be spending my new years with Johanna who was my roomie in Gran Canaria and we also spent last year's new years together. And here we are again, but this time in Thailand!

We had a lovely dinner and then we went down to the beach and watched people send up lanters in the sky, counted down to midnight and watched the fireworks.

Then we spent the rest of the night dancing away, starting of the new year in a good way! I'm starting to enjoy spending christmas abroad rather then in a cold sweden. Sure I miss the cosy white snow and the swedish traditions, but it's not going anywhere so I might as well enjoy the christmas in the sun!
This christmas started as usually on a sunday - at the airport. We had 3 flights and 3 departures and we were greeting all the guests with our lovely christmas hats! After the airport shift we headed back home to get ready for our christmas evening, first pre party on the roof and also playing the christmas presents game! Then we headed to the restaurant for a lovely not so christmasy dinner but very good tho! Then we ended up at chang bar as usual haha.

And here is a picture of the lovely team Krabi!