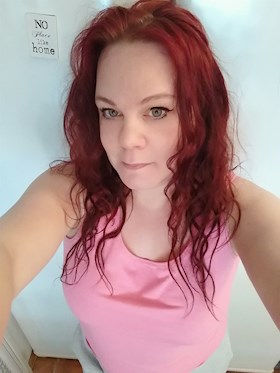 Healthqueen
Viveca "Vivi"
My namne is Viveca,or as my friends say ”Vivi”.
I will blog about health in every way, both inside and outside, how to live a healthier lifestyle, training, fitness and weightloss. I will talk about training both in the gym, who are my favorite place and at home. I want to motivate my readers to keep going on a healthier journey or start on a healthier journey, both if you alredy are well trained or a beginner. Sometimes I will give you a challange or two. This is a subject that I am very fond of. This applies to my oldest son.
Oscar is 16 years old and has PTSD and with it follows a depression.

What is PTSD?
The full name is posttraumatic stress disorder.
PTSD is a mental disorder that can develop after a person is,exposed to a traumatic event, such as sexual assault, warfare, child abuse or other threats in a person's life.

You probably wonder what my son has been exposed to and why I tell you about it. Firstly, I can mention that Oscar is a co-author of this post. It is his story and he has approved of everything.

Oscar's story:
I divorced from my children's dad when they were 4 and 2 years old.
Unfortunately, there was no calm divorce, it led to a 9-year custody battle about the kids.
The children, especially Oscar, felt very bad. He had more responsibility than a child should have at home with his father, he protected his little brother. They were exposed to both physical and mental abuse by the father and his family. All this led to police investigations, investigations at the social office, police inquiries and more. It was a tough time for Oscar. When he was 12 he tried to kill himself 4 times, but thankfully he didn't succeed.
I got sole custody of the children and their father got contact ban.
Everything calmed down and Oscar had a "good" period. But last autumn he got worse again.
Now he is going to undergo a trauma investigation and process his trauma, get aids to handle his anxiety, his feelings and thoughts. It will take a while so that's why there will be a series about Oscar and his way to a better life and mood.

Why do we write about this? After all, to increase understanding of PTSD. Many think it only affects soldiers who have been at war, but it can hit anyone.
We want you to understand that you can have "good" periods but also very difficult periods. You should never compare your trauma with others, all people react differently.

Oscars goal is to learn to control his anxiety, his feelings and thoughts and handle it properly when it attacks him.
The journey can be long, and it will be extremely demanding and tough, but together we will manage it.