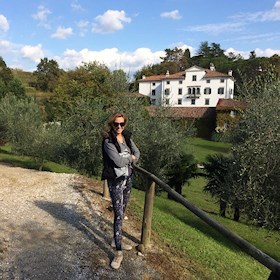 Finland meets Italy on all levels in life, join our journey... we work, play, travel. We live on 55 m2 but are soon moving in to the house our dreams. We are here to stay DeFinIta.

We woke up to new powdery fresh white snow covering all the rooftops of Kranjska Gora and the whole neighborhood out in their driveways shoveling snow! It was a very joyful sight.s We had a slow breakfast with my favorites, dark bread, coffee and sour yoghurt / milk, in Finland we call it Piimä, in Sweden kefir and to my happy surprise also in Slovenia they drink Kefir.

We left the fantastic apartment hotel, concluding that this was a suitable way to live with kids as we could prepare pasta to bring with us to the slopes.

And the day that the kids had been wanting for, finally arrived, first time on skis. They were amazing! We rented skis one hour which was very suitable first time experience and the kids slope here was the best for trying out this art for a first time. After an hour they were happy but tired, and we agreed that for a first time an hour was enough to leave them with a happy memory and longing to get on the skis again. And that is what they have been requesting the whole afternoon. Today was a day off in Italy. We had originally planned to move this weekend but since there’s still some paperwork hanging we will likely need to wait until January. For this reason we had no real plans for the weekend. Last night we were checking hotels in the alps on Slovenian, Austrian and Italian sides but could not make up our mind. Therefor this morning we basically started driving in direction of Tarvisio with no real target than hopefully some snow and sledding, maybe premier on skies for the kids, maybe a Christmas market. When we arrived in Tarvisio it was raining so we started driving towards Premollo, that was so foggy and empty that we did not even want to exit the car. At this point of time the kids had fallen asleep, and were ready for a serious quarrel on who’s fault it was that we did not have a hotel yet, that no one had checked the forecast and that this was in general a very poorly planned excursion.

Standing between driving back to Trieste or stopping for lunch in Tarvisio to calm down and realign options we decided for the latter... luckily... now after a fantastic meal, some sledding in Tarvisio, an evening tour at a fantastically winter lit Kraniska gora; we ended up in an apartment hotel larger than our current apartment with autonomous heating. The kids have been playing, now they sleep and the rain has turned to big white flakes falling outside the window, with some continued luck we will ski tomorrow!