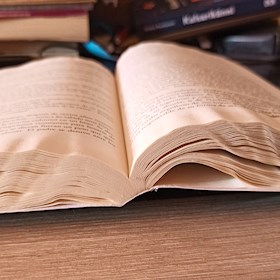 Come read about good books I can't shut up about, and bad books because they're fun to review.
Kontakt/Contacte/контакт
vuorille a gmail . com

Thank you for the review copy of Loss. You tell a powerful story. Several layers of questions kept me turning the page: How is Mike going to cope with the death of his daughters? How is Emily going to live with guilt and grief? Is it going to weld them together or push them apart? We get the answer to the latter early on, but the same chapter opens a whole new catalogue of possibilities. The ending fits. You had me guessing until the last page, but it looked inevitable when it arrived.

However, not all is praise in this review. Your style is remarkable for a self-published author, but Loss is still begging for an editor's red pen. The opening scene most of all. You show us Sam's diner in a painstaking amount of detail. We find out what the salt shakers are made of and when the owner last had the countertop changed. Sam himself gets an introduction worthy of the main character of a thousand-pager. But he turns out to be a small supporting character, one step above furniture. His diner would deserve the attention if it were the main location of the story, or if a tornado tore it to shreds so you could later show us that countertop in splinters. But neither is the case. You take us back to Sam's diner in chapter 16 for coffee and a conversation. Most of the book happens elsewhere.

The sixteen pages of Chapter 1 could be sixteen lines or less. Chapter 2 is where Mike's story begins. Chapter 2 is also where we find out that Mike is the main character. Before that, he looks like a minor figure while his sister Jean and her husband get a large introduction and backstory, only to later reveal that they are just supporting characters.

Emily, on the other hand, gets no backstory at all when she clearly would have one worth telling. Where are her parents? Does she have any siblings? Does she have close friends? Emily doesn't behave like the hermit type. But you show her as unconnected as an antisocial orphaned only child.

You pay much attention to unimportant and uninteresting things, Mrs. Deeley. Do I need (or want) to know somebody's brand of body wash? And the way many women react to Mike makes me think of cheap erotica. But you found your voice around page 100. From then on, you pay the right amount of attention to all the right things. And Loss turns captivating. Keep writing in that style. Get your copy on Amazon.co.uk or visit the author on www.britannicabooks.com.