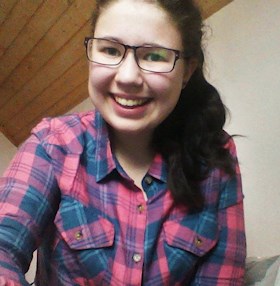 BooksForYou
Hanna, 22 year
I am Swedish book lover and I will be writing reviews of books I have read, hauls of books and just books in general! A few weeks ago I went to YANovCon in Millbrae and had the opportunity to meet the author of this book and let me just tell you she's one of the coolest people I've met in a while. BUT before I actually got to meet her I walked up to the stands where they sold the books and held this one and strongly considered buying it, but ended up with another book (trying to not buy too many books). Then I later went to a panel that she was on where she talked about it which made me go back and actually buy the book. When I later got it signed she also told me that if all goes to hell and I don't like the book I can use it as a coaster instead. But enough about me.

This book is about Fat Angie who in her first year of High School publically attempted suicide after her sister (who she was very close to) had gone missing in the Iraq war. Fat Angie is also fat, in case that wasn't obvious. These two things made it very easy for others to pick on her in school, and there's the main bully Tracy Ann who leades the rest of the school. However the big bully in Angie's life is at home. Her mom. But one day a new girl shows up to the school and Angie's life is strongly affected by that and we follow the story from there.

This book had all my emotions going and I felt that it had very strong characters with important roles to the book. A little over midway through the book I was incredibly mad at one of the characters for how they treated Angie that I actually had to put the book down and take a breather to calm myseld donw before I could continue. This books deals with some heavier topics (bullying, suicide etc) and I find that it does it in a very captivating way.

I wanna take a minute to break down the different characters in this book, as I felt they all had very strong personalities.

Angie - Overweight, bullied, loves her sister who now has gone missing and struggles with self image. Her life isn't easy. Her brother has been acting all weird since their sister went missing. Her dad left town. Her mom is so focused on having the "perfect family" even though they really aren't, especially with recent events. Everyone keeps calling her "special". They say "You're a special girl" and this pissed me off so much. They talk to her like she's stupid, and treat her the same way. This is not okay behaviour, especially from adults. In reality Angie is a very determined and loving person who just struggled to keep up with the world at some points. But she proves everyone wrong when she tries out for thevarsity basketball team. She shows them that she can, just like her sister could. That there is more to her than just her body and some of her choices in the past.

Tracy Ann - She made life a living hell for Angie. I know that we get a redemption for her, but I don't find that redemption good enough. No matter what you don't treat another person like she did with Angie. Tracy Ann is manipulative and rude and atention seeking. she doesn't care about the people around her, she's the boss and she makes the rules. She made me so so angry, but she wasn't the worst -

Connie, Angie's mom- What a b*tch. The way she talks to her daughter is not acceptable. She demands her to loose weight before she can get any clothes that actually fit. She restricts what Angie can eat (even though Angie actively started thinking about this herself). She forces her to go to a special therapist, one that is supposed to be better, but from the notes we get is actually only making it worse for Angie. All the comments the therapist put down were degrading and actually rude. But back to the mom. She insinuated time upon that Angie was stupid, and even less worthy. That Angie is an embarassment and that it's wrong to be different. This woman is the kind of person who should never have been allowed to have kids. She is, wothout even realising, Angie's biggest bully. She was the reason I had to take a breather part way through the book because of how she spoke to Angie. I really REALLY felt that I wanted to go there and just smack that woman in the face.

KC - The new girl at school who dares to stand up for the girl everyone bullies, with all the consequences that might bring. She stands up for Angie time and time again when Angie is too scared to to it herself or just too used to it by now. KC helps Angie see that there is more to her. That she doesn't have to be Fat Angie, but that she can be just Angie. She can be herself. Thouggh she is not perfect either. Their relationship to each other is very flawed, but at the end of the day they always talk it out.. KC is also not only helping Angie, Angie is also able to help KC.

Wang- First of all, who treats their siblings with such disgust in public? He is extremely nasty to Angie at some points, but Angie actually stands up to him. I think he's the only person she was comfortable standing up to - because she knew him and what his life consisted of. She knew that he had reason to be acting up, even if that doesn't jusstify his behaviour. Though Wang develops a lot throughout the book. After he leaks the picture of Angie and KC he actually feels remorse and understands that he has gone too far. He stands up for Angie to their mother. He supports her trying out for basketball and even though he still has a lot to learn and can get a lot better still, he has started taking the right path most of the time by the end of the book.

Jake - The neighbour from the "perfect" family. A person Angie to begin with dispises because he's so "perfect". She keeps making assumptions about him that are not true and she throws these assumptions in his face. He treats her with kindness and she reacts with being hostile. Likely because she is not used to people being kind to her for no reason, since her sister went missing she hasn't had anyone do that to her and she doesn't know how to react. But even thoguh Angie is being rather rude to him he still keeps coming back to help her, to be there for her. He's tehre for her when no one else is, even when she is being rude o him. He's the kinda friend we all need, the kind of friend we all should be.

Coach Laden - As many characters she seemed to change a lot throughout the book. at first I didn't like her at all. She kept saying that Angie was a "special girl" and didn't really tell Tracy Ann off for her behaviour until KC stood up for Angie, even though Coach Laden knew perfectly well that it wasn't Angie who started anything. But then she gives Angie a chance. She starts supporting Angie in a way she hadn't before. I'm still not sure about her motives or why she did anything, and I'm still on the fence abouth wether or not I like her.

This book was a rollercoaster of emotions, and I don't think I've ever felt as much anger while reading as I did with this book, but that is not a bad thing. It just meant that the characters were really convincing. We went from happiness and pride for Angie after her first game that she got to play in to only a page or two later feeling so incredibly sad for her and how unfair everything is.
I absolutely loved the Forrest Gump esque ending to this book, with them all running all the way around their town, even Tracy Ann - even though she didn't seem to like that she was there. That created a sense of community and belonging. I finally felt that people would accept Angie and no longer bully her.

All in all this was a very good read and I'm incredibly happy I liked it, since I read it after I met e.E Charlton Trujillo and reallly liked her as a person too. She was really nice and energetic, and not ashamed to talk about her rock bottom of life (at one point she had been homeless, and that was when she started writing this book) or how people would compare her to Fat Angie. She has a great sense of humour as well.

Until next time - hopefully a few years sooner than this gap!