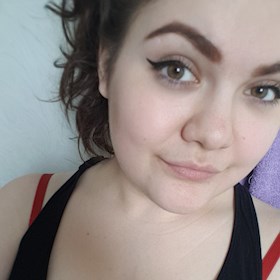 Heya! ^-^
I'm Ash, I'm 25 years old. Live in Sweden. Currently studying to become a youthleader .^-^
I'm a gamer-girl, with a passion for a lot of mixed things that you get to follow here! (???)
With my emoji-addiction and fantastic sense of humor! ??

I figured I could throw in some motivation for you all. 😊
Sometimes things might feel rough or everything feels like crap, but remember that for every hard fight in life you go through, you'll get your "price" at the end. Don't be scared of change or if you feel insecure, believe in yourself!!

I usually have inspirational quotes or words like this on my phone, my calendar, my notebooks for school, my computer..
So whenever I feel unmotivated or I feel like I'm struggling I'm always looking at them and just taking it in It is very important to have dreams and goals, because then you always have something to go for.
It doesn't have to be something crazy, just something. ^-^ Saturday January 16th was a very sad and horrible day for me, my 14 year old stepdaughter and 11 year old niece. We went to the town pool called "Storsjöbadet", since both of them likes it I thought it could be fun to go there and just have a fun day. But it turned out to be something else..

We were in the big pool and was swimming around and laughing and having a great time, when a group of 5-6 immigrant guys came up to us. At first I didn't think much of it, I mean it's a local pool.. a lot of people go there.
Then the worst thing happens.. My 11 year old niece says to me that one of the guys touched her lower private parts. I got chocked and asked if she was sure, since it's a very serious accusation. She said that she was sure, and just as she said that one of the guys was swimming under water towards her lower parts and tries to touch her, I grabbed her and pulled her close to me. The guy came up and pushed his crotch against my thigh, I pushed him away and said "Stop it". He just gave me a smirk and laughed and talked in a foreign language.

I told the girls to follow me, so we went to another part of the pool. 1-2 minutes after that they came and touched my stepdaughter on her breasts and butt. They also touched me in all places, even though I made it very clear that I did not approve of this. So I told one of the lifeguards, my niece is friends with his daughter so he knew who my sister is. He told me to show him the guys, and I did.. I told him what they've done to us, I told him that I want them to do something about this because neither me, my stepdaughter or niece felt safe. He said that "If they do it one more time, we will throw them out"... One more time... I couldn't believe that he said that to us, they sexually harass 2 minors and me.. but it okay that they get to swim around and maybe do the same to others!

We went to eat something just to get a break from that, it was a very sick to have to feel like this in a place were families and people in all ages are supposed to have fun and feel safe. After we ate neither my stepdaughter or niece wanted to leave my side.. My niece was riding on my back most of the time and my stepdaughter always very close.. not even an arm length from me. Is it supposed to be like this in a public pool?
That the predators gets to swim, stalk, touch little girls and ruin their lives for ever, but the victims has to watch their back and feel unsafe and go home because they can't relax and that it just feels like we are a part of a meat market.

I've been to that pool many times before and nothing like this has ever happened before, ever..
Where is this country going?

I messaged local newspapers when we came home, LTZ and ÖP. I also took a chance and wrote to a news paper called Fria Tider, they were the only ones who helped me to get this out there so more people gets warned about what's going on. Neither ÖP or LTZ was interested of this, although after Fria Tider published their article, Facebook blew up with a lot of comments, I also got called a liar and a racist. I'm not even close to be a racist, my boyfriend and his daughter are from another country.. A lot of people were irritated that ÖP or LTZ didn't write about this, and shortly after that a journalist from LTZ contacted me and said he wanted to interview me, which I agreed to and also a guy from Sveriges Radio (Swedish Radio) contacted me and wanted to do an interview. Both LT and Sveriges Radio came over to my apartment to do an interview. Later that afternoon a journalist from ÖP contacted me.
I did that interview over the phone I asked all the journalists to send me the article before it got published, ÖP were the only one who gave me an insecure answer.
I read through them and gave my OK. Today ÖP published a EDITED and CHANGED article of what I said OK to, so I confronted ÖP on their Facebook page. They deleted my post. I published the picture of the original article ÖP sent me and they deleted it.

What that says to me is that they don't give a shit about me or the girls, they want to protect the predators and
stand by them. It was a slap in the face. I contacted the newspapers because I wanted to give others a chance to know what's going on so other kids doesn't get in the same situation.
I've gotten a lot of negativity from this, and I was prepared for that. But also a lot of positive from a lot of people.

I'm going to leave all the links to the different articles so you guys can read it, also the link to the Youtube video with the recorded interview that I had with Fria Tider.
#låtossinteberätta #dontletusspeakout
http://www.friatider.se/badvakter-storsjobadet-ostersund-ofredande-flyktingar-elvaaring
https://www.youtube.com/watch?v=UIw7dV8IFWM
http://www.friatider.se/lokaltidning-censurerade-ann-sofie
http://www.ltz.se/jamtland/ostersund/11-aring-sexofredades-pa-storsjobadet-nu-berattar-slaktingen-ann-sofie This email was the original article that ÖP sent me, and I said that this one was ok.
See the difference between the new one they didn't tell me about until I saw it this morning.
http://www.op.se/jamtland/ostersund/trakasserier-anmalda-pa-storsjobadet-jag-kanner-mig-inte-trygg-dar

​Leave me your thoughts on this in the comments!